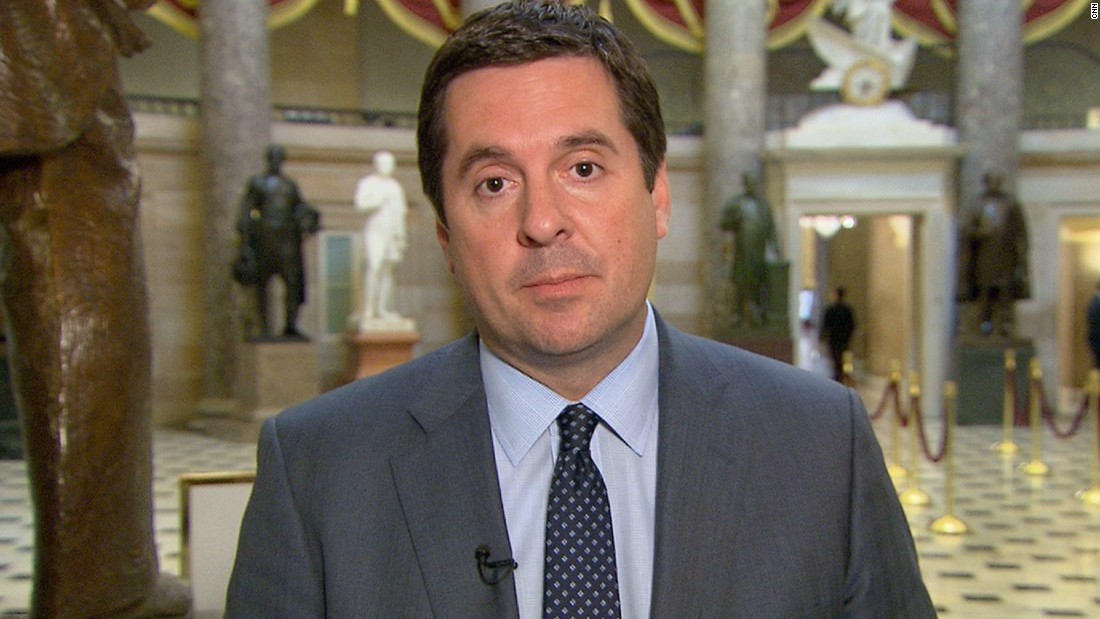 (CNN)House intelligence chairman Devin Nunes announced Thursday he was temporarily stepping aside from leading the investigation into Russia’s meddling in the 2016 elections.

Nunes cited a series of ethics complaints filed against him alleging that he violated terms of discussing classified material following his clandestine meeting at the White House just over two weeks ago.
“I believe it is in the best interests of the House Intelligence Committee and the Congress for me to have Representative Mike Conaway, with assistance from Representatives Trey Gowdy and Tom Rooney, temporarily take charge of the Committee’s House Russia investigation while the House Ethics Committee looks into this matter,” Nunes, a California Republican, said in a statement.
He added, “I will continue to fulfill all my other responsibilities as Committee Chairman, and I am requesting to speak to the Ethics Committee at the earliest possible opportunity in order to expedite the dismissal of these false claims.”
Nunes stepping aside is the second high-profile ally of President Donald Trump to become a political casualty of a widening investigation into potential collusion between the Trump presidential campaign and Russian operatives, following Attorney General Jeff Sessions’ recusal from any relevant investigation in the Justice Department.
The California Republican alerted the White House of his decision Thursday morning, a senior administration official told CNN.
Nunes did not directly cite his trip to the White House in his decision, but the ethics complaints stemmed from his visit two weeks ago. Top Democrats have called for him to recuse himself since it was revealed he collected his intelligence on the White House grounds, but Nunes had resisted those calls until now.
The ranking Democrat on the committee, Rep. Adam Schiff of California, said respected Nunes’ decision, he said, was made “in the best interests of the committee.”
“I look forward to my continued work with the Chairman on the whole host of other important issues that our committee oversees every day,” he said in a statement.
House Speaker Paul Ryan said in a statement that he trusts Nunes, but also supports his decision to step aside.
“In the meantime, it is clear that this process would be a distraction for the House Intelligence Committee’s investigation into Russian interference in our election. Chairman Nunes has offered to step aside as the lead Republican on this probe, and I fully support this decision,” Ryan said.
The Wisconsin Republican said he’s confident that Nunes’ replacements on the investigation will conduct “a professional investigation into Russia’s actions and follow the facts wherever they lead.”
In public, House Republicans, including Ryan, had expressed confidence in Nunes and said he should continue leading the investigation. But behind the scenes, some rank-and-file members had quietly raised concerns.
The House intelligence committee met earlier Thursday, but Nunes did not tell members during that meeting of his decision, a source said. Schiff described the mood in the meeting room Thursday morning as “somber.”
“I learned about it as you all did when the chairman issued a statement,” Schiff said.
Conaway, a Texas Republican, who will now lead the House Russia investigation, said he hopes to work with the committee’s Democrats to get the Russia investigation back on track, but said he’ll need their cooperation.
“We’re going to pursue the investigation, follow every lead to its logical conclusion,” Conaway said. “We’re going to conduct the investigation and I’m looking forward to working with my colleagues on both sides of the aisle to pursue every lead.”
“I’ll need cooperation from both sides to make that happen,” he added.
Gowdy declined CNN request for comment.
At least one Democrat on the committee sounded optimistic about the change in leadership. Rep. Eric Swalwell said he learned of Nunes’ resignation from news reports.
“I have confidence in Mike Conaway,” the California Democrat said. “Hopefully, now we come back with a clear path to an independent, credible investigation.”
Trump elevated Nunes’ clandestine White House visit this week by painting a target on former national security adviser Susan Rice and saying the evidence he has seen proves former President Barack Obama was spying on him.
That evidence, first revealed by Nunes two weeks ago, has become the center of its own power struggle in the Russia investigation — with Democrats accusing the White House of withholding that intelligence from them.
Trump was asked by The New York Times Wednesday if he would reveal that intelligence, but he said he did not want to talk about it.
The House investigation has been rocked by turmoil since FBI Director James Comey announced in late March that the FBI has been investigating possible collusion between top aides of Trump’s campaign and Russian officials who sought to sway the US election.
One day after that stunning revelation, Nunes secretly visited the White House to review evidence that is now at the center of Trump’s counter-offensive. The ensuing chaos rocked the House investigation and led some lawmakers to declare it dead, but Republicans and Democrats have slowly been setting it back on course.
Speaking to reporters, Schiff maintained Thursday, “the investigation never went into hiatus.”
House Russia investigation

Fitbit’s first smartwatch can now make payments in the UK