CEO Travis Kalanicks treatment of one of his drivers shows Ubers institutional sleazebaggery, seeing social responsibility as an outdated piece of apparatus 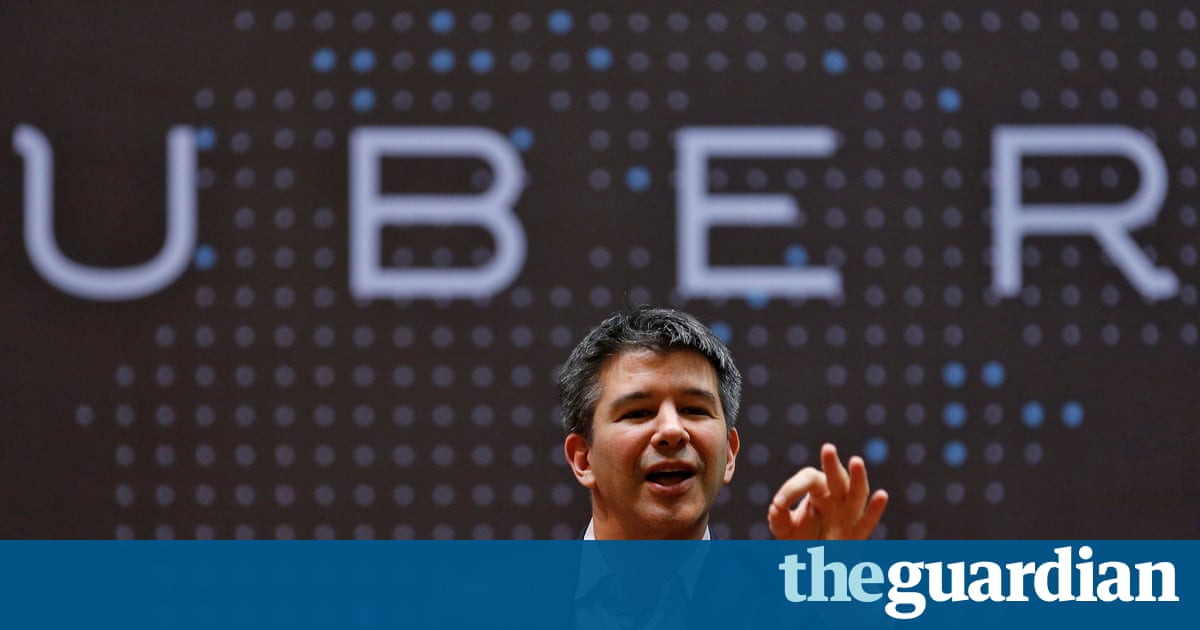 There are very few things that $5bn cant buy, but one of them is manners. This week video emerged of Travis Kalanick, the CEO and founder of ride-share app Uber, patronising and swearing at one of his own drivers, who complained that harsh company policies had forced him into bankruptcy. Some people dont like to take responsibility for their own shit, sneered Kalanick. Truer words were never spoken by a tycoon: for Uber, along with many other aggressive corporations, not taking responsibility for your own shit isnt justa philosophy, its a business model.

Uber has barely been out of the news this year, with a succession of scandals cementing the companys reputation as a byword for cod-libertarian douchebaggery. Accusations of strike-breaking during protests against Donald Trumps Muslim ban sparked a viral campaign to get customers to delete the app. A week later, a former employee went public with accusations of sexual harassment and institutional misogyny. Kalanick, who was pressured to withdraw from a position as a business adviser to Trump, is now facing legal suits across the world from drivers who insist that they would be better able to take responsibility for their lives if they could earn a living wage.

Liberal outrage has been a chorus to Ubers apparently unstoppable rise, but it has never before been a bar to its expansion: the company continues to grow, even as it registers record-breaking revenue loss around the world, much of which it puts down to the inconvenience of still having to pay its drivers.

Given what we already knew about Ubers institutional sleaziness, why is this clip so shocking? Because it reveals an uncomfortable truth about the character of our modern power elites. Part of us would prefer to imagine the svengalis of exploitative businesses as polished, scheming villains, geniuses enviably unencumbered by such old-fashioned burdens as ethics and morality.

From Trump down, these men would prefer us to picture them as competent and potent a little brash, perhaps, but thats all part of how corporate power brands itself. This is why it matters that this video exposes Kalanick, one of the worlds richest men, as a thoroughly unpleasant person. There is an ugly entitlement in the way he swears at the driver sorry, his partner, albeit one without a seat on the company board. He doesnt come across as ruthless. He comes across as rude.

This is not how robber barons are supposed to behave. They are supposed to have at least some regard for appearances. Theyre supposed to deliver scripted business aphorisms and twirl well-waxed moustaches while opening orphanages for the children of workers who died of exhaustion. What were dealing with here is a new class of bastard: the bro gone pro, the freewheeling post-Randian slimeball whose insecure sense of entitlement is the foundation of his business model.

That entitlement is key. Charges of sexism against Uber are not just incidental to the way the company operates. They are symptomatic. An organisations attitude to women is a good predictor of how it will treat its workers. There is clearly an outfit that regards at least one half of the human race as rather less than sentient. One of its executives threatened to expose the personal details of a female journalist who questioned the way the business was being run. Kalanick has joked, if you can call it a joke, that he should have named his company Boob-er, because of the amount of action he gets out of it. The corporation offered French riders the perk of being driven about by attractive women.

Uber clearly has as little regard for the consent and dignity of its customers, its low-earning partners and the communities in which they live as it does for the consent and dignity of womankind in general. This matters because Uber is more than just a tech firm. It is a social engineering outfit masquerading as a tech firm, and it appears to regard social responsibility as an outdated piece of apparatus, a wooden coach-and-four in an age of tarmac. The last great American entrepreneur will be the person who manages to monetise placards and pitchforks.

Heres the awful truth: we have entrusted the reorganisation of our social infrastructure to the sort of people who shout at their subordinates and drivers and view women as a collection of parts. We do not owe these people our money or our admiration.

It remains to be seen whether Uber will be damaged by the activist call for riders to please, for goodness sake, stop using this service. A great many people feel they have no option but to be complicit. Uber grew in the social sludge of American cities with patchy and precarious public transport provision and high unemployment. In areas where there are few late-running trains and taxis are unaffordable, taking an Uber home is the ethical equivalent of the greasy late-night kebab: you know its bad for you, but theres a filthy, guilty pleasure in being able to meet your immediate animal needs. Your gut might make you answer for your midnight takeout, but it wont kill you.

Using a service like Uber, however, is slow social poison. We are living in a socioeconomic reality whose driving philosophy can be accurately described by a sauced-up frat-boy in the back of a taxi, and we continue to venerate its winners. How much complicity can we tolerate before we get off this dodgy ride?

‘Vegan vacations’ are so popular now that even omnivores want in

Help your business thrive through challenging times with Agile